I happen to live on a few acres of land, and while I try to keep a somewhat manicured lawn and garden up by the house, most of the rest of the property is left to its own devices. Trees fall down in the woods, blackberries grow along the right of way, and sometimes things like this pop up beside the driveway.

I saw it start to grow and was going to pull it up, but Bill said to just leave it and see what happened. As it grew, the thick, spiny stems splayed out in all directions. 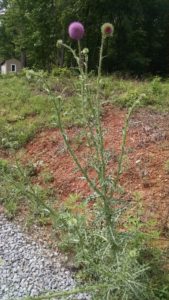 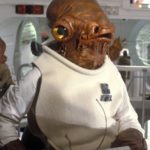 I passed it every day as I walked to the end of the driveway to meet the kids’ school bus, and while I knew it was just a common thistle, I couldn’t help but start thinking it looked like some alien plant.  Something that might grow on a planet were these guys are from, the Mon Calamari from Star Wars.

I must not be the only one who sees something a little strange looking and starts imagining life on other planets. Or alien species on our planet. A few days ago, a story popped up in the news that some scientists have proposed that octopuses are aliens from outer space. Well, technically they’re saying that the eggs of the original octopuses traveled to Earth on a comet. Granted, it is highly controversial research and denied by many scientists. But octopuses are such interesting looking creatures, I can see how someone might think they don’t necessarily fit in with the aquatic world and start imagining that they’re really a being from another planet. The thing is, that line of thinking usually falls in the realm of science fiction world, not scientific research.

Maybe we’re just looking at things from the wrong perspective. Instead of viewing a large thistle growing by the side of the driveway or in the middle of a cow pasture where they’re usually found, as something that doesn’t belong, instead we should just accept it as one of the beautiful, creative aspects of our natural world. A world that brings us such things as the platypus, the Venus flytrap, and countless other crazy-looking species that diversify life on this planet. Because without diversity, life would just be boring.