When Bill and I were newlyweds living in Greensboro, we were invited to supper at the home of a couple in our church who had been married quite a bit longer than we had been. I’m sure they had us over to help introduce us to people in the church, or to get to know us better since we were newcomers. I know we had a good time, because Mr. Hull was a great storyteller and always a lot of fun. But what I remember most about that evening is their yard had one of the most beautiful forsythia bushes I had ever seen. The forsythia bush at the Hulls’ house was not just one of the biggest I’d seen, it also had a beautiful shape to it. It sprayed out like fireworks, and looked like it grew there effortlessly, although I knew from my work as editor of Carolina Gardener magazine that beauty like that often came from some very skilled pruning.

I’ve always loved forsythia. Some people pooh-pooh the bush, because it only flowers for such a short time and is pretty non-descript when not in flower. But I love the little yellow flowers that to me mean springtime in the South. And I grew to love it even more when my roommate in college, Cynthia, said she always loved it because she used to think people were saying it was her flower — “For-Cynthia.” So of course I was drawn to that bush and it made an imprint on me. But even more than the fact that it was a forsythia, I remember thinking that night, “I hope someday that I live in a house long enough to have bushes that big and beautiful.”

That time has come. And not really because of any specific plan or goal. This is my view out the window of my office: 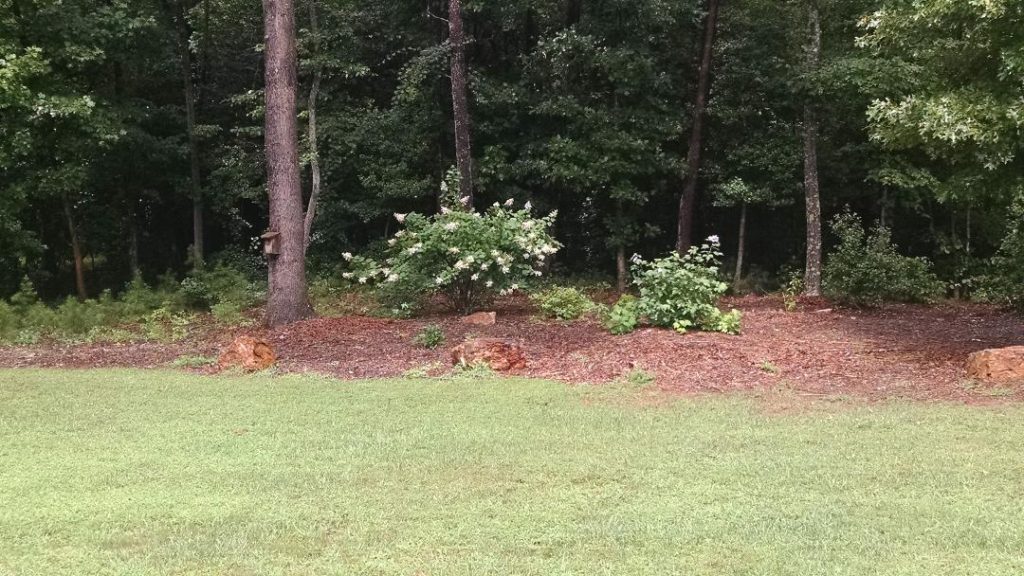 Every day for the past couple weeks, I’ve looked out at the blooms on this hydrangea, and marveled at the beauty of the lacy white set against the dark green of the woods. I’d love to take credit for the beautiful shape, but really I owe that to the deer. Yes, deer. Those animals that are one of the biggest garden pests have actually been a benefit to me. I’ve seen them, in the early spring when there’s not much green out in our woods, venture up to the edge of our yard and nibble the shoots coming out of my hydrangea. They’ve pruned the hydrangea so that it splays out like fireworks, just like that forsythia at the Hulls’ house.

There’s been a big gap in time from that night at dinner to now. And I have to admit, I didn’t consciously think to myself when we were landscaping this yard that I wanted to plant shrubs at the edge of our yard to grow big like the Hulls’. But for some reason this summer, when I looked out at the hydrangea, it brought back memories of that forsythia. And a satisfaction of sorts bubbled up inside me. I did it. I now have a bush in my yard like that forsythia. One that says to people, this family has invested time and love into their home, into building a life and a place for their family. And it all happened by accident. 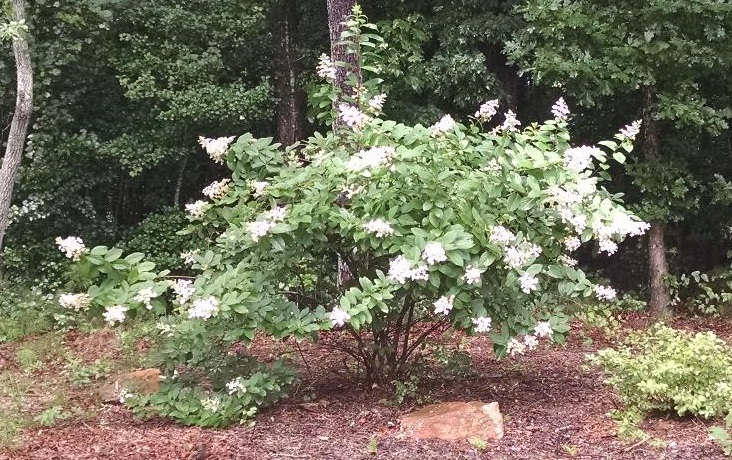 A close-up of the hydrangea.