It was a running joke on our post-Christmas trip to Ohio that the “RealFeel” temperature on my phone was always at least 10 degrees less than the actual temperature. On our drive up, while we were in the middle of the trip in West Virginia, I would look at my phone for some entertainment.

“Hey guys, it’s 34 degrees in La Rue (Bill’s hometown). But it feels like 22!” Peals of laughter would come from the backseat.

That held true most of the trip, especially a couple of days later when the high temperatures dropped to the 20s, and the “RealFeel” was in the teens.

We all tried hard not to be longing for that warm “feels like” number. It was especially hard knowing they were predicting an unseasonably warm and sunny weekend in Elkin while we were gone.

Instead of thinking of all the things I could be doing at home on a warm winter weekend (wash the car, do some yard work, go for a run), I embraced the impending cold of Ohio as only a lifelong southerner would. Honestly, my early childhood in Atlanta and then the rest of my life spent in North Carolina did nothing to prepare me for the bitter-cold temperatures and biting winds of Ohio. We all had winter coats, but really, how often did we wear them as a kid? And wool sweaters? Given as gifts at Christmas, they are only pulled out of the closet on those rare days when it snows or high temperatures hover around the freezing point. So I relish the trips to Ohio when I get to wear wool socks and wool sweaters on a daily basis, and putting on a hat and gloves is as necessary as the coat to go outside. The romantic in me likes to get out in the cold, imagining I’m finally feeling what Laura Ingalls felt in those blizzard-filled winters on the prairie.

Of course, it’s much easier to make a trip to a cold place an adventure when you know it’s temporary.

We left Ohio just before high temperatures started making it only up to the teens, and gladly welcomed the phone’s readings on our way home, stating that the temperature in Elkin was 34, but felt like 45.

That “feels like” temperature fascinates me, and has even before it was at my fingertips on my phone.  It can be a bitter cold day, but if the sun’s out, I take the kids outside to play and we’re all fine, if we’re bundled up enough. But take a day 10 degrees warmer, damp and cloudy, and it’s miserable to be outside. Throw in some heat and humidity, and an 80-degree day feels like 90. When does the temperature ever feel like what it really is? When there’s no humidity and no wind. Practically never, in my uneducated opinion.

The temperature discrepancy is only one thing I love about the weather. I may not watch the Weather Channel, but I am somewhat of a freak when it comes to keeping up with weather reports. It’s not like I’m a farmer and depend on weather for my livelihood. I think it’s more that I’m fascinated that we try so hard to explain something over which we have no control.

It might feel like -20 in Chicago today, but that doesn’t mean people didn’t go to work. Blizzards and mudslides both made the news last night, with the home and car damage they both entail, yet here today the sky is blue and the view outside my window is stunningly beautiful, even if it is a bit cold. We might be able to modify our foods, choose the people we socialize with and even watch our favorite TV shows whenever it’s most convenient for us, thanks to the DVR. But Mother Nature, in all her horrible fury and magnificent beauty, is something we, as human, can’t control. And there’s something a little bit comforting about that. 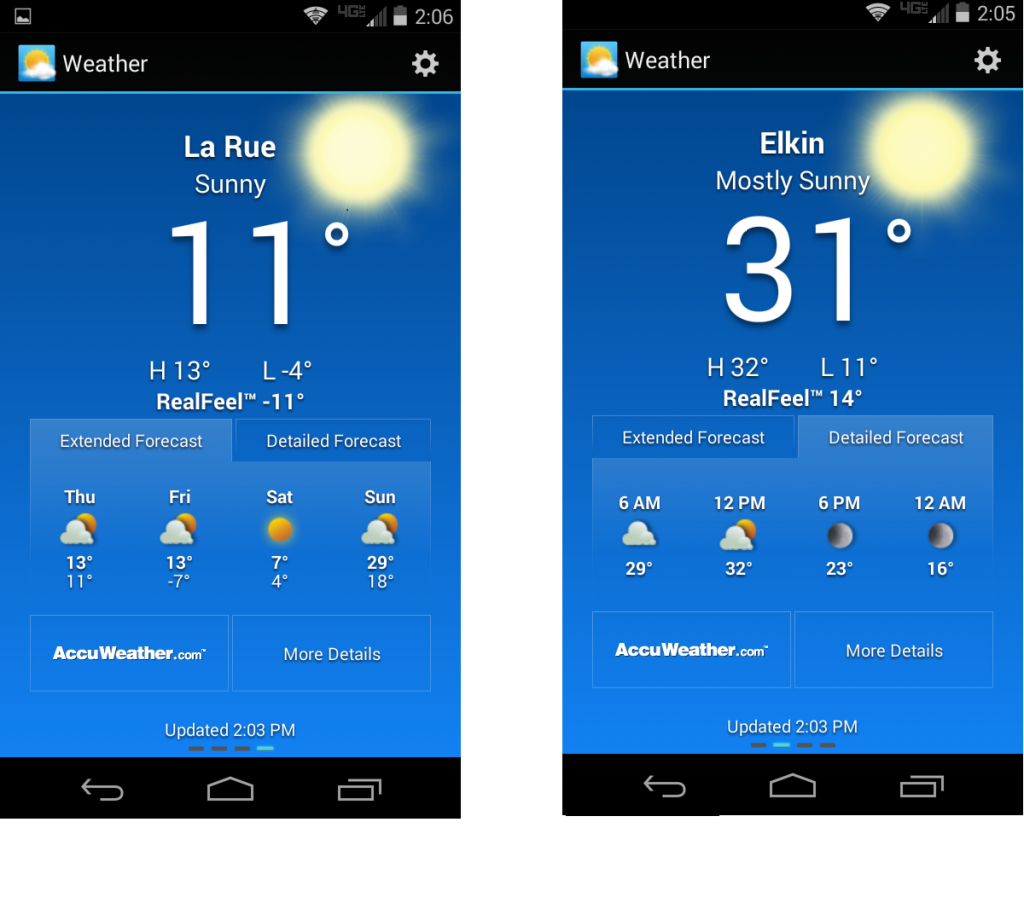 Today’s temperatures (Jan. 7). It’s pretty cold here, but the same “feels like” trend is still in place. Ohio beats us every time! (Or we beat them, depending on how you look at it.)