Home » Friends » A Roller Coaster of a Week
Tue09

A Roller Coaster of a Week

“It was so interesting to me that a ride could make me so frightened, so scared, so sick, so excited and so thrilled, all together. Some didn’t like it. They went on the merry-go-round. That just goes around. Nothing. I like the roller coaster. You get more out of it.” Grandma, played by Helen Shaw, Parenthood, 1989.

For most of my life, I’ve interpreted this as a motivational speech, where Grandma was encouraging Steve Martin’s character to take risks on things that might seem scary but in the end are rewarding, in his case having another baby, or in my life I associated it with things like falling in love or taking a new job.

But sometimes the roller coaster of life takes us places we don’t want to go, and last week, that happened to me. Labor Day weekend had started off just like any other: Cleaning the house, doing yard work, hanging out with the family. I’d say I was on the straightaway part of the roller coaster, zooming along at a regular speed, no big ups and downs. Then on Sunday morning, I went down one of the steepest hills of my roller coaster so far. I literally felt my insides lurch. I received a call that one of my best friends, Cynthia Luckie, had passed away a few days before. Cynthia was my roommate my freshman year of college, and that’s often how I found myself describing her even today, 20 years after we met.

But she was so much more than that. She was my friend, my confidant, my counselor. Miles might have ultimately separated us, but she was never more than a phone call away. We talked for hours about TV shows we were watching, politics, sports, her work, my work, her family and my family. Even though she was a 10-hour drive away from me, that didn’t mean I didn’t see her. Class reunions at Davidson were often an excuse for her to come spend the weekend at my house, but we found other reasons as well. Life events like weddings and new children were a must, but there were visits just for the heck of it as well. She was like an aunt to my children, and it was quite a milestone for Caroline when she grew to be taller than Cynthia. 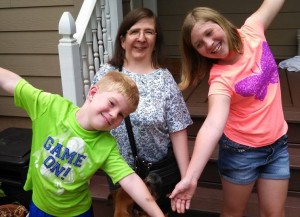 It’s an understatement to say that going to her funeral was hard. But it was also good in some ways to be able to celebrate Cynthia’s amazing life with other people who loved her as dearly as I did. In her own way, she afforded an opportunity for me to reconnect with old friends, as well as meet a few new ones who I felt like I already knew from Cynthia’s stories.

That was Tuesday. Wednesday I drove the seven hours back home from Columbus, Ga., where the funeral had been. Thursday I was in a fog. I was still in that downward section of the roller coaster where I felt like my guts had been kicked out of me.

And then Friday was my birthday. I’m old enough to be at the point in my life where birthdays really don’t mean that much. I don’t expect people to remember, I don’t really want to have a party, and I really don’t need to blow out a bunch of candles. But thanks in part to Facebook, birthdays rarely pass by unnoticed these days. And first thing in the morning, I woke up to a birthday greeting from a very old friend, one who goes back even farther than Cynthia. She has remembered my birthday ever since we met in middle school, and every year when I get a birthday greeting from her, it makes me smile. I felt that roller coaster car I was on start to make its way slowly up the hill. After that, a few more notifications came through, more birthday wishes from friends. And each time the notification rang on my phone, I could feel myself getting a little happier. Slow, sure and steady, just like going up a hill on Thunder Road.

If I’m honest with myself, I’m really more like Steve Martin’s character in Parenthood, happy with the status quo, not so excited about change. But the truth is, life is messy. Just like Grandma said, it’s frightening, exciting and thrilling. It’s full of happy moments, times of complete exhilaration, and times of tremendous grief. And then sometimes you’re just somewhere in the middle, riding along the straightaway.

I’m glad that for so many years of my life Cynthia rode that roller coaster with me. And that she truly enjoyed riding her own roller coaster, living every bit of her life to its fullest. 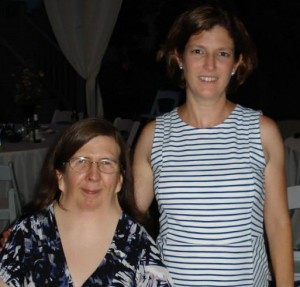 Me and Cynthia this past June. Another great excuse for a trip together, our friend Janet’s wedding!