It’s hard to think of it as spring, as it seems almost this entire month of March has been filled with cold days, windy weather, dreary rain, and even snow! And not even the good snow that piles up and makes for great sledding for a day or two, but mushy, wet snow that melts away before you get a chance to play in it.

That’s what makes me all the more happy whenever I turn into our driveway and see my periwinkle in full bloom. I think this year it is blooming more than ever. And as much as I hate to admit it, it’s probably due in part to Bill. I planted some sprigs of periwinkle on that steep bank of red clay 9 years ago when we moved into our house, knowing that it would spread quickly and help control erosion while looking pretty year-round. Granted, the red clay wasn’t the most welcoming place to plant it, so the periwinkle didn’t spread as fast as I wanted it to. Which means that instead of choking out all other growth, there are grasses that have made their way into that area here and there.

For the past few years, Bill has mowed up the side of that bank at the end of the summer to cut back the tall grass, and every time I fuss at him for mowing down my periwinkle. Just when it seems to be bushing out a little, he cuts it back, and I worried that it would stunt its growth. But it has continued to spread, and has finally covered the whole bank.

So as much as I hate to admit it, I feel like Bill gets some of the credit for all these beautiful blooms. I know that cutting back perennials and shrubs will often encourage more blooms. That, along with the slow-release fertilizer I finally remembered to throw out last year, have made the periwinkle look better than ever.

Together, we have made a pretty little entry-way. And our unexpected teamwork in the garden seems very symbolic of the teamwork it takes for a healthy marriage. Sometimes it might not be obvious that what he or I are doing is helping each other out, but as long as we are working toward the same goals, our efforts aren’t wasted. Sure, it takes a gardener to see a symbol of marriage within a bloom of periwinkle. But isn’t spring a time for finding symbolism in nature? Here’s just one more to add to the fertile bunnies that led to Easter bunnies bringing treats and butterflies symbolizing new life through Christ. 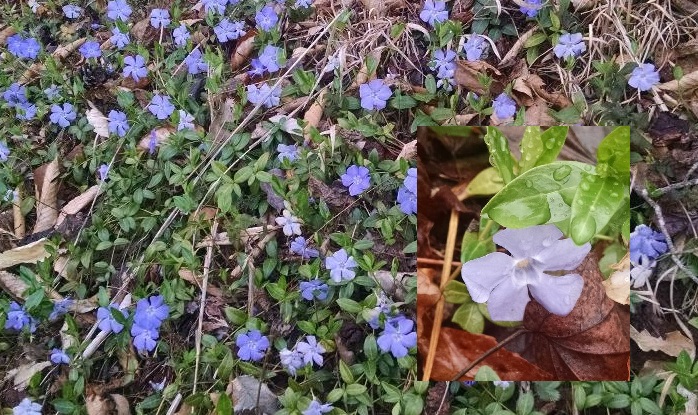