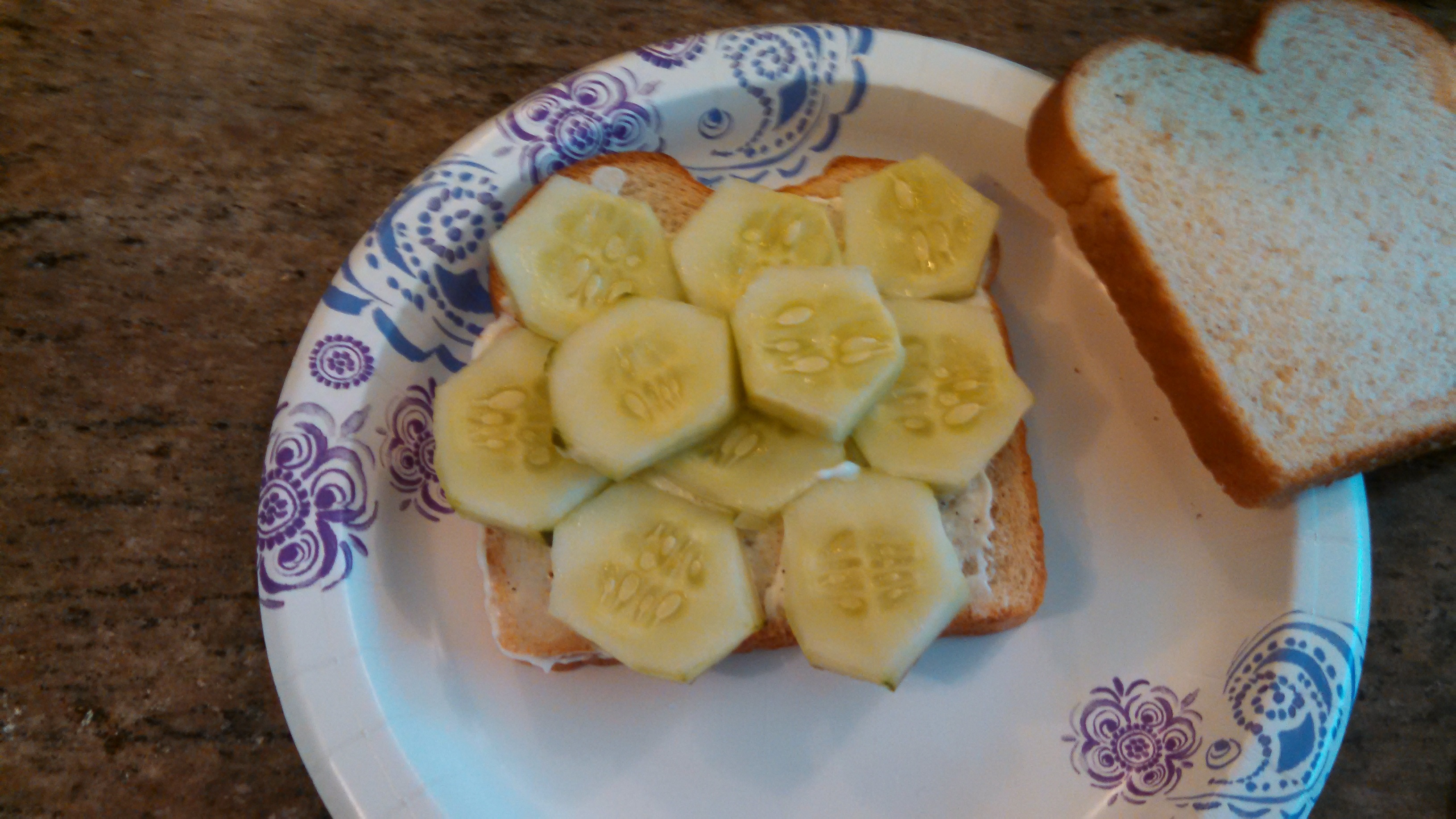 Lately it seems like I’ve seen a lot of links to lists of ways to know you’re 40, good things about being 40, bad things about being 40, and multiple other variations on that same theme. Maybe I’m just seeing them more lately because my friends and I are hitting the big 4-0. The lists include exactly what you would suspect: your favorite bands are now played on classic rock stations, your weekends are full of afternoon birthday parties instead of all-night rages, and you’re happy with going to bed before 10 p.m.

Well, I have a new one to add to the list. You know you’re over 40 if you find yourself eating a cucumber sandwich for lunch.

Yes, I did it. Something I always thought of as a choice only made by old people. People who go on and on about how wonderful a tomato sandwich is, and sing the praises of half-runner beans. I ate a cucumber sandwich, and liked it. And I’m still slightly in shock about the whole thing. I admit, I’ve never been a big fan of cucumbers. My grandfather called them a worthless food, and I totally agreed with him. Of course, he was wrong. These little things pack a punch with potassium and vitamin K, as well as other vitamins and antioxidants. Don’t get me wrong, I don’t hate cucumbers, I just don’t find myself saying, “Man, I could really go for a cucumber right now.”

The funny thing is, I’ve always grown them in my garden, just because it seems like the thing to do. The staples of a southern garden are green beans, tomatoes, squash and cucumbers, and I have them all. And in an ironic twist of fate, it seems like every year my bumper crop comes from the cucumbers. The squash, which I love, always produces gangbusters for about two weeks before wilting away from the heat and humidity. I get a few tomatoes, enough for some good BLTs, but I can’t claim success there. And after some intense study and much trial and error, I’ve finally become successful with green beans. Enough so we eat some fresh and freeze a few bags to remind us of the garden in the winter.

While it seems almost everything I choose to grow is fickle, the cucumbers grow without fail. Rainy, cool summer like last year? Tons of long, skinny cucumbers. Hot, dry summer this time around? I’m picking at least three nice sized cucumbers every day. This year shorter and thicker, but still prolific.

Luckily, my husband feels cucumbers are a staple on his salads, and I get great joy out of seeing my picky eater of a son wolf down a whole cucumber (sliced) while I make dinner. But I usually steer clear. Until last week. I don’t know whether it was desperation from the fact there was really nothing else appealing to eat that day, or the fact that I really want to enjoy my garden this year for the few weeks that it’s producing, but lunch time came, my mom was here, and when she said, “I think I’ll have a cucumber sandwich,” I decided to have one too.

I still like BLTs more. Much more. But there was something satisfying about eating a lunch that came from the garden, even if the centerpiece was a cucumber. A friend of mine recently read Barbara Kingslover’s Animal, Vegetable, Miracle, and wrote a great post about the book and food culture in her blog, Running Monologue. Kingslover’s book documented a year in the life of her family where they ate only what they grew, raised themselves, or bought locally. While I am nowhere near being able to do that, I do love growing a garden, and try to incorporate the meager harvestinto our meals as much as possible. I also try to pay attention to the fruits and vegetables I buy for my family, buying what’s in season and buying locally when I can.

So since I continue to grow cucumbers out of habit, I decided to try to use them more in my meals, hence the first try at a cucumber sandwich. It’s easy enough to grow only what I like, but it’s a lot more fun to try some new things. Who knows what could hit the table next — cucumber soup, cucumber salsa, cucumber salad … 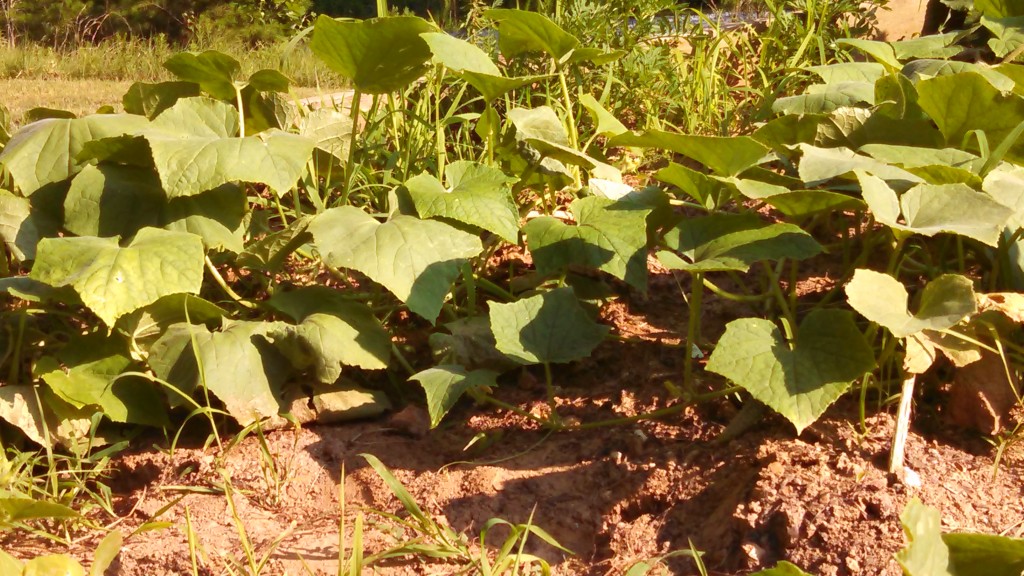 These healthy leaves and vines are currently twining themselves through every available space of my garden, with cucumbers in all sizes soaking up the wonderful July sun.