Home » Family » Grow a Garden with Your Kids (and watch them eat salad!)
Thu18

Grow a Garden with Your Kids (and watch them eat salad!)

We’ve all seen the research and the articles touting the fact that kids will eat more vegetables if they take part in growing them. I’m here to tell you, what these experts say is true. I admit, I had been somewhat skeptical. After years of saying to myself that it was the parents who caused picky eaters by allowing their children to eat only macaroni and cheese and chicken nuggets, I learned my lesson the hard way. Not with Caroline. She ate whatever I put on her plate — green beans, carrots, sweet potatoes, even broccoli. Then came Carter. He turned up his nose at green beans, avoided meat of any sort unless it was processed and breaded, and absolutely refused to eat broccoli.

Then, last summer, I witnessed a miracle. After going out to the garden to help pick some things for dinner, Carter offered to make a salad. And he ate it! The bowl full of carefully chopped ‘Ruby Red’ lettuce, banana peppers, cucumbers and cherry tomatoes served as a true turning point.

Now I can say with confidence that in my experience, what the researchers found was true. Kids are more likely to eat vegetables, or at least try them, if they’ve grown them themselves and had some contribution with the preparation. And you better believe they will be helping me in the garden again this year!

There’s a lot more good to gardening than just getting them to eat vegetables. Here’s some of why I love dragging the kids to the garden.

So what do we plant? I only have a small garden and tend to stick to the basics: green beans, tomatoes, squash, and cucumbers. But I always include some things for the kids, like cherry tomatoes and snap peas, both of which they love to eat straight from the garden. Good snacks when you’re playing outside!

The thing to remember when you garden with kids is to grow things that come up quickly, and that are relatively easy to care for. We start out with plants for our tomatoes, but the bean seeds pop up quick. And even though neither kid likes radishes, we always plant them. It’s just fun to pull them up out of the ground!

This year we’re experimenting with okra. It’s the first time I’ve grown it, but I thought it was worth a shot, since Caroline likes to eat it. And maybe Carter will too! 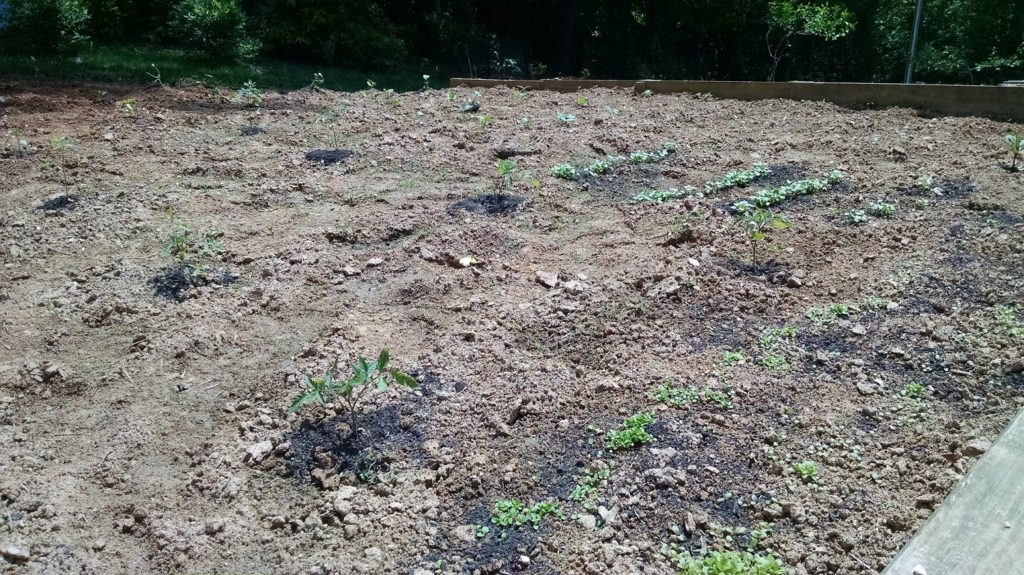 There’s not a lot to see here, everything’s just now coming up, but at least this is the time when there’s no weeds!