The other day I when I was sitting on the porch at my parents’ house, the smell of gardenias hung heavy in the air, and I breathed it in deeply. For those of you who aren’t familiar with these iconic southern flowers, the smell is sickeningly sweet, in much the same way as old-fashioned roses whose blooms perfume the air with strong fragrance, enough to inspire perfumes and poems. Yet the fragrance of gardenias is nothing like roses. Gardenias have their own unique smell.

For me, the smell of gardenias inspires vivid memories of my grandfather. Sitting on the porch that day, I could see in my mind as clear as day my grandfather sitting out there too, wearing his button-down, short-sleeved shirt and dress pants, usually in a tan or brown color, reading the paper or going through the mail. We spent a lot of time out on that porch. It was the house that he grew up in and then lived in once he retired from a career as an industrial engineer, and he loved it.

Out on the porch, he taught me about what it meant to be a Presbyterian, and he also taught me about other denominations as well. When I dated a boy who went to the Church of Christ, Grandpa handed me a book with a chapter to read on the history of that denomination, and then we sat on the porch and talked about the differences and similarities between my church and Chris’s. The porch was where we had conversations about the environment and the need to recycle, something we disagreed on greatly as I was passionate about conservation, whereas he came from a generation that was taught the world was ours to use. And the porch was where he got out his scrapbook from World War II, and shared some of his memories with me and my brother.

He also liked to eat lunch out on the porch, and the summers when I worked at the bank downtown, I would walk the three blocks to Grandpa’s house and join him and Grandma for lunch on the porch. I probably associate egg salad with that porch as much as I do gardenias.

All of these memories and more flooded my brain the other day on the porch, and all because of the smell of the gardenias. The funny thing is, Grandpa wasn’t someone you would normally associate with flowers. He didn’t garden, that was my grandmother’s arena. He didn’t even do yard work. He paid someone to mow the lawn.

But for some reason, he loved those delicate little white flowers and their sweet fragrance. When the gardenias were in bloom, he always had one in his shirt pocket. And there were vases with blooms set out all over the house, so no matter where you went you could smell gardenias.

No wonder I associate Grandpa with that smell. His house was probably the only place I was around gardenia blooms as a kid, so every time I smelled them I was with him.

And now I’m thankful for the memories that those flowers conjure up. Not only of the man who studied and read and liked to have serious conversations, but of a man who saw beauty in the world and appreciated it, in his own way. He may have had a stern demeanor, but he had a soft side as well. It was something I got a glimpse of once in a while, on rare occasions. I saw it when he held out his arm to help my grandmother down the stairs, in an unspoken gesture of compassion. I saw it when he spoiled my cousin’s cat Mosca, giving her treats and letting her sleep on his lap. And I saw it when he bought himself a very thick, heavy winter coat just so he could come to the high school football games and stay warm while watching me play in the marching band.

For me, I will never be able to see a gardenia without thinking of my grandfather. And maybe those gardenias were important to Grandpa for the same reason they are for me, for the memories. For a smell that brings to mind a time of life filled with family and home. 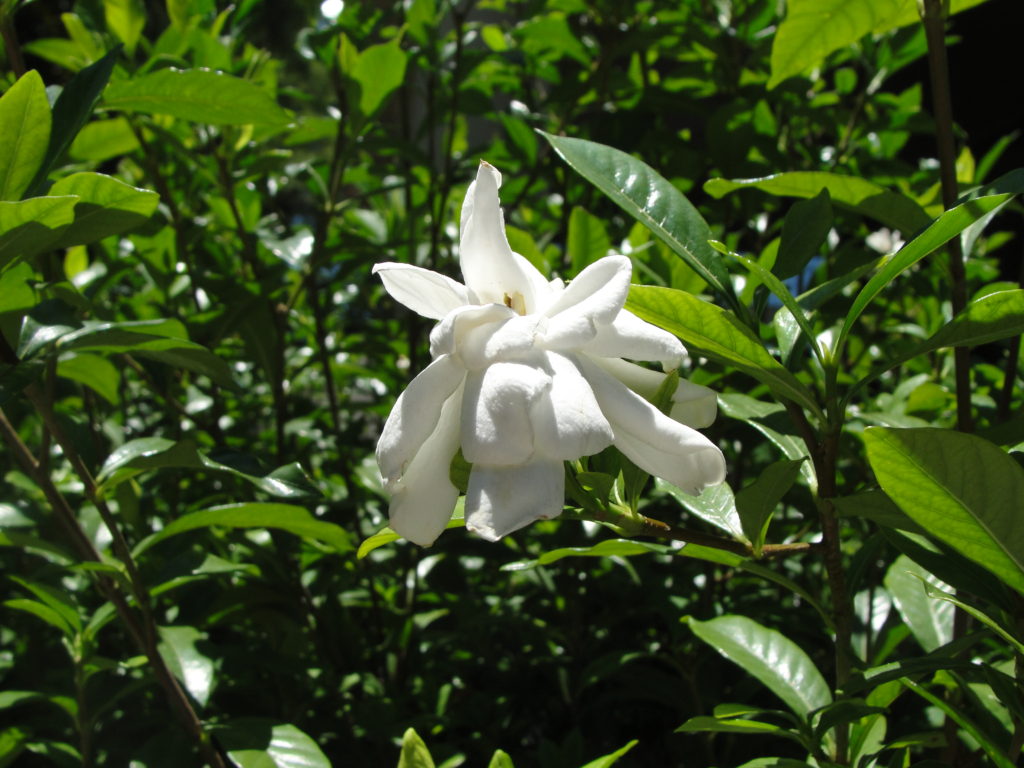