There are some plants in the garden that seem to thrive no matter how hot and humid August gets. My zinnias are one. Those flowers just never stop! But it seems like most of my perennials wilt during the overbearing weather of late summer, a lot like we as humans do. Those days when you just step outside and break a sweat can be tough. The weather completely zaps your energy before you really even get anything done.

So when my coneflower quit blooming and the hibiscus succumbed to an insect that totally disseminated its leaves, I figured it was getting to be the time of year to start cutting back and moving on. After all, the first frost would be just around the corner.

But then I had a happy surprise. Through the month of September, when the days were warm but not as hot as August, I started to see a revival of sorts in my garden. Not only were the mums and asters blooming, which they’re supposed to do in the late summer/early fall, but some of my perennials started to perk back up and bloom again. I’ve had a second round of blooms on my rose bush, the coreopsis, and the ‘Going Bananas’ daylily. 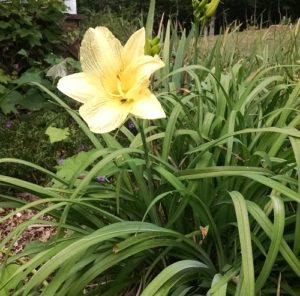 This daylily lives up to its name of ‘Going Bananas’!

Here we are in the third week of October, and I have a garden that looks like an odd mix of early spring and late fall. Maybe the name of that daylily was symbolic. Is this a sign that our climate is going bananas, when I have daylilies blooming on October 19? Late last year, after our first frost, we had a warm spell long enough that some of the forsythia and other early spring bloomers started blooming. I worried that they wouldn’t bloom again in the spring, but they did.  And now we have a summer that seems like it just won’t end.

It’s hard not to worry about climate change. This article from Slate.com written in March and updated monthly, shows in a humorous way just what we’re experiencing. What will our world be like in 20 years, or 30, when my children are adults and raising children of their own?

I can only hope that we are taking steps now to stall some of the dire affects climatologists warn us of. And in the meantime, I will ease my worries by enjoying the blooms in my garden. After all, it’s hard to deny that a cheery yellow daylily brightens up your day!