August in the Garden

Let me preface this by saying that I love all four seasons. But August in the garden is my least favorite month of the year. This year it seemed to hit me even harder. I got back from one week at the beach and it seemed like everything had totally gone to pot. 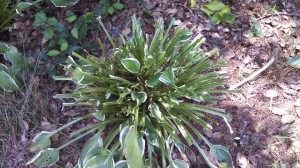 With the dogs at the kennel, the deer apparently had free run in the yard and my hostas are now just nubs. Some of the weeds in my perennial border were taller than the perennials, and the lorepetalum that I cut back last February is too big again already. That one has been a lesson in “right plant, right place” for me.

The grass in the yard was suffering from lack of rain, but somehow that didn’t seem to affect the vegetable garden, which was overrun with grass. This was a major setback, since I had tried really hard to keep the weeds out this year. On top of that, the deer had trampled my tomato plants and something (I’m blaming deer here, but it could have been anything) devoured the tomatoes that were just starting to get ripe. Not to mention the bean plants were just stems, thanks to the swarms of Japanese beetles.

As I aimlessly wandered around looking at the overgrown mess, I wondered why I even bother trying to keep things under control when obviously the whole place turns into a jungle this time of year no matter what I do. The nice little mounds of flowers placed in fresh mulch have turned to overgrown messes in mulch that looks old and neglected. 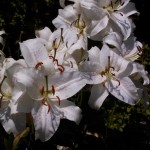 But it’s not like me to be a “glass half empty” person, and my disheartened feeling slowly gave way to a little joy. It started with the big white blooms of the Easter lily, a definite bright spot in the garden. They’d had buds for weeks, and it was so exciting to see them in all their glory. Surrounding them are the verbena plants from Proven Winners that have provided fabulous color all summer long and are still going strong. 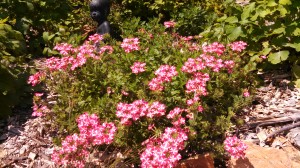 This Superbena Royale Cherryburst verbena from Proven Winners has definitely been a winner in my garden all summer long. Look for it next summer!

So I grabbed my gloves and a pair of shears and set to work. After pulling out some thorny weeds and doing some major trimming, things started looking good again. At least if you turn a blind eye to some select parts of the yard. 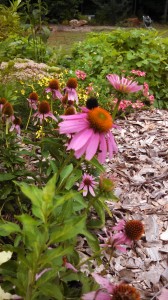 This ‘Little Annie’ purple coneflower is another Proven Winners plant.

August will always be that time of year when the weeds seem to take over, things start growing out of bounds and I just feel somewhat overwhelmed by the garden and all it entails. But at least it doesn’t signal the end. Rather than thinking of August as the end of summer, which is somewhat depressing, I’m going to try to reboot my attitude and think of it in its own terms. It’s a time when things are big and healthy and green. It’s the time of year when butterflies are out in full force, landing on the coneflowers in my garden and the Joe Pye weed on the edge of the woods. It’s the time of year when the crickets are the loudest, serenading us each night with their summertime music while the fireflies continue their mating calls.

As I live in the moment, harvesting basil for a few batches of pesto and picking the zinnias that brighten my table, I can see that there’s plenty of good things about the garden in August to keep me enthusiastic. There’s always something to enjoy in the present, and even more to look forward to in the future. 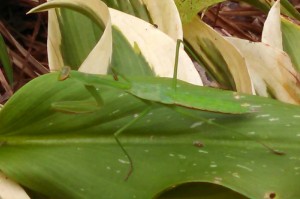 Couldn’t resist adding a picture of this visitor.